Nicotinamide Adenine Dinucleotide (NAD+) is a coenzyme that is present in each living cell in the body. It is produced from the breakdown of nicotinamide riboside (niagen), an alternative form of vitamin B3 (niacin). NAD+ plays an integral role in energy production and regulation of vital cellular processes such as DNA repair, strengthening cells’ defense systems, conversion of food into a useable form of energy, and regulation of circadian rhythm.

NAD+ converts nutrients into adenosine triphosphate, a compound that provides energy to living cells. Aside from this important function, it works together with various forms of proteins to carry out a wide array of biological processes such as DNA repair, calcium signaling, maintenance of cell energy and chromosomal integrity, and gene expression. 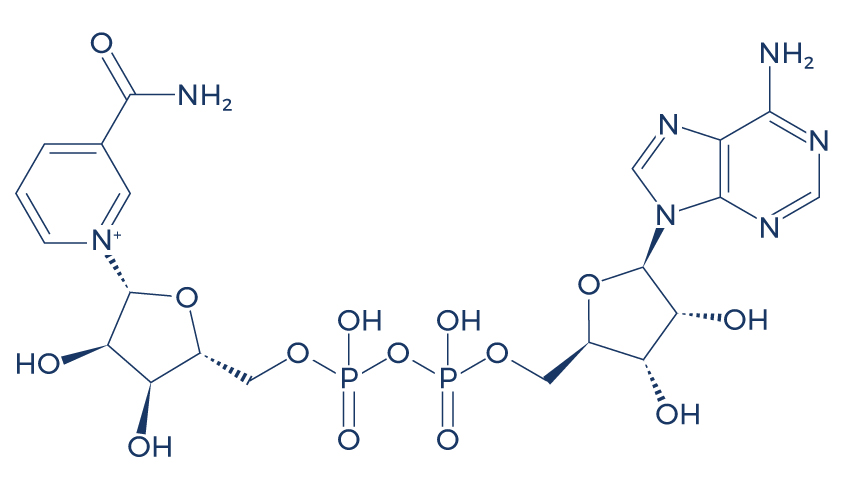 Aging is associated with progressive restriction in the length of telomeres, which are located at chromosomes ends. They play an important role in the preservation of chromosome stability. Studies have shown that individuals with longer telomeres have a longer subsequent lifespan. [1-2] Increasing sirtuin activity is known to stabilize telomeres and attenuate age-related telomere shortening. [3] Since NAD+ activates SIRT1, it can help achieve chromosome stability and longer telomeres – all of these mechanisms can increase longevity.

The natural process of aging is associated with a decline in the quality and activity of the “powerhouse of the cell” known as the mitochondria. As the name imply, the mitochondria produce the energy needed to power the cell’s biochemical reactions – everything from the transmission of signals, digestion, muscle function, and other essential bodily processes. Mitochondrial function is a determinant of lifespan and studies show that mitochondrial dysfunction can shorten lifespan. [4-5]

Another mechanism that can help extend lifespan is through the activation of SIRT1 function in the nucleus of cells. Evidence suggests that boosting NAD+ levels through NAD+ supplementation can dramatically ameliorate mitochondrial dysfunction via activation of sirtuin 1 (SIRT1). [6] SIRT1 is an enzyme that plays integral roles in the regulation of proteins involved in cellular metabolism and processes associated with longevity, inflammation, and stress. SIRT1 activation by NAD+ can increase longevity by promoting mitochondrial biogenesis, a cellular process that involves the production of new mitochondria. [7] 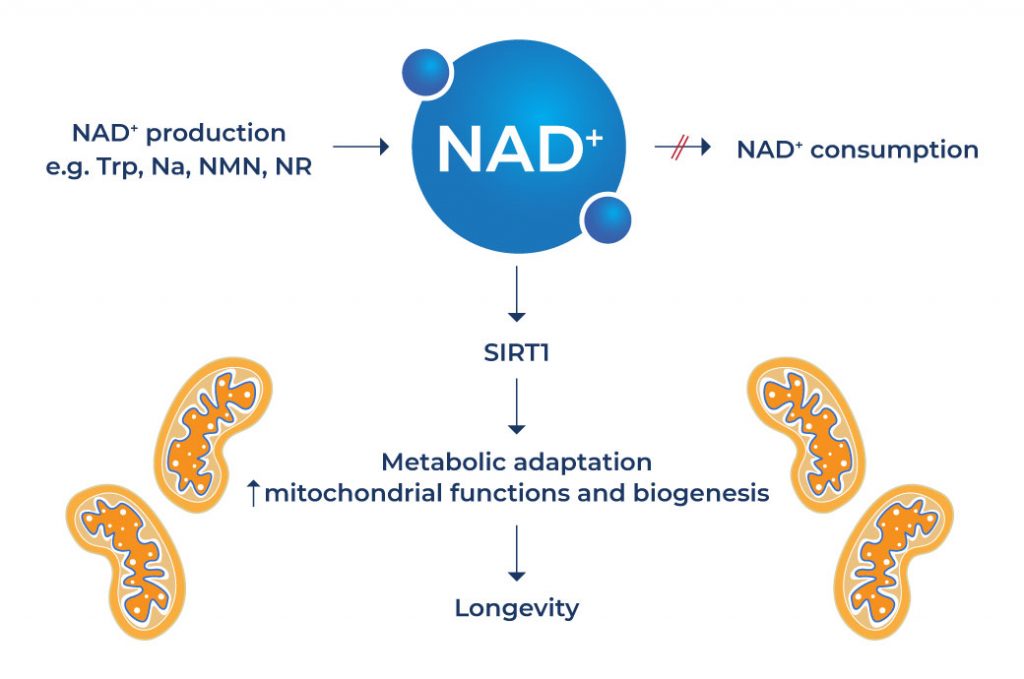 A convincing number of evidence suggests that NAD+ can extend lifespan:

While a decline in the function of the mitochondria has been linked with normal aging, this is also associated with a wide array of age-related medical conditions. Evidence suggests that mitochondrial aging contributes to cellular senescence (also known as biological aging), increased inflammation, decreased stem cell activity, reduced healing rate, and a decline in tissue and organ function. [16] Interestingly, NAD+ can reverse age-related mitochondrial dysfunction via SIRT1 activation.

New research found that some of the age-related changes in the structures of the mitochondria can be reversed through NAD+ supplementation. [17] In this study, the administration of NMN (nicotinamide mononucleotide), a molecule that boosts NAD+ levels, via injections in elderly mice reversed age-related mitochondrial deterioration. It was observed that declining NAD+ levels were associated with interruptions in the normal signaling between the cell’s nucleus and mitochondria. Interestingly, raising NAD+ levels restored the communication between these cellular structures.

During the normal process of aging, DNA damage occurs continuously on a massive scale. The age-related DNA damage contributes to cell death and a decline in the function of neurons or nerve cells. This creates a domino effect, causing a gradual decline in a number of bodily functions. NAD+ can mitigate these effects since it is connected to the DNA repair precursor poly adenosine diphosphate-ribose polymerase 1 (PARP 1). PARP 1 consumes NAD+ in the presence of DNA damage in order to promote cell survival. This in turn can help slow down the effects of aging.

NAD+ plays an integral role in energy production and regulation of vital cellular processes. This includes the conversion of food into a useable form of energy called adenosine triphosphate.

The ability of NAD+ to induce weight loss can be attributed to its energy-boosting mechanisms. With increased energy expenditure, the body will not store additional fat. Instead, the metabolism is increased, resulting in weight loss.

There’s a great deal of evidence supporting the fat-burning effects of NAD+:

Studies show that NAD+ can help combat loss of muscle mass and strength associated with aging and musculoskeletal disease:

A decline in NAD+ levels is associated with a number of neurodegenerative diseases such as Alzheimer’s disease, Parkinson’s disease, and other brain disorders that cause cognitive dysfunction. [11] Interestingly, NAD+ has neuroprotective effects and ability to decrease the production of reactive oxygen species (ROS), which are linked to a wide array of medical maladies including neurodegenerative diseases.

NAD+ can also help prevent cell death by regulating the activity of poly adenosine diphosphate-ribose polymerase 1 (PARP1). [56] PARP1 activity is usually increased in the brain of patients with Alzheimer’s disease and other neurodegenerative disease and is associated with increased deposition of abnormal protein structures in the brain. [57] Basically, NAD+ regulates PARP1 activity so that it will not kill too many cells before they can be repaired.

In addition, NAD+ plays important roles in a wide array of biological processes in the brain such as transmission of nerve signals, learning, and memory. [58] NAD+ helps increase the levels of brain chemicals called neurotransmitters, such as dopamine, serotonin, and norepinephrine, which are involved in a number of cognitive functions including memory, motivation, attention, mood, and emotions.

Increased NAD+ levels can also help boost the activity of SIRT1 and SIRT6, both of which inhibit the growth and spread of tumors via alteration of beta-catenin signaling and reduction of glucose uptake. [98-99]

NAD+ levels are essential for normal heart function and are associated with improved cardiac recovery from injury. Interestingly, SIRT3, one of the signaling proteins of NAD+, can help improve heart health by preventing enlargement of the heart and scarring. [105-107]

NAD+ activates SIRT1 which in turn increases the production of nitric oxide, a substance that helps widen blood vessels to allow an increase in blood flow. This process reduces the pressure within the blood vessels.

A number of studies support antihypertensive effects of NAD+:

NAD+ can help improve blood sugar levels by reducing glucose (blood sugar) uptake. This in turn prevents sudden spikes in blood sugar which can be detrimental to health. In addition, NAD+ can also help increase the body’s response to insulin, a hormone that regulates blood sugar.

There’s a good deal of evidence supporting the beneficial effects of NAD+ on blood sugar levels:

The age-related shortening of telomeres adversely affects the function of the immune system. These adverse changes can significantly increase the risk for severe infection and even death. Studies suggest that patients with significantly shortened telomeres are at higher risk for different medical conditions such as rheumatoid arthritis and diabetes mellitus (type 1 and type 2). [135-137] Since NAD+ activates SIRT1, it can help achieve longer and more stable telomeres. This has a positive impact on the overall function of the immune system.

There is growing body of evidence that NAD+ can help strengthen the immune function:

Several lines of evidence suggest that NAD+ can help prevent the development of liver diseases:

Reduced levels of NAD+ also reduce sirtuin activity. This process is largely responsible for the age-related decline in kidney function.

Latest studies indicate that NAD+ is beneficial for kidney health:

Associated Side Effects of NAD+

Side effects associated with NAD+ may include the following: