NMN (Nicotinamide mononucleotide) is a natural molecule produced by the body and is classified as a nucleotide. Nucleotides are involved in a wide array of important bodily functions, including as the building blocks of DNA. Within the cells, NMN is converted into another molecule called nicotinamide adenine dinucleotide (NAD+). NAD+ plays an integral role in energy production and regulation of vital cellular processes such as DNA repair, immune function, conversion of food into a usable form of energy called adenosine triphosphate (ATP), and regulation of circadian rhythm. In simple terms, NMN is the raw material and NAD+ is the refined version that the body can actually use to perform essential biological processes. In addition, the amount of NAD+ that the body can produce greatly depends on the available NMN.

NAD+ is not very bioavailable. This means that ingesting it directly will not achieve its therapeutic or desired effects. Therefore, one of the most effective ways of boosting NAD+ levels is through NMN supplementation.

The health benefits of NMN can be attributed to its ability to boost NAD+ levels. Once NMN is converted into NAD+, activation of the sirtuin 1 (SIRT1) function in the nucleus of cells happens. SIRT1 is an enzyme that helps regulate proteins involved in cellular metabolism and processes associated with longevity, inflammation, and stress. In addition, the NMN-mediated increase in NAD+ levels counteracts age-related mitochondrial deterioration by promoting mitochondrial biogenesis, a process by which cells increase mitochondrial numbers. 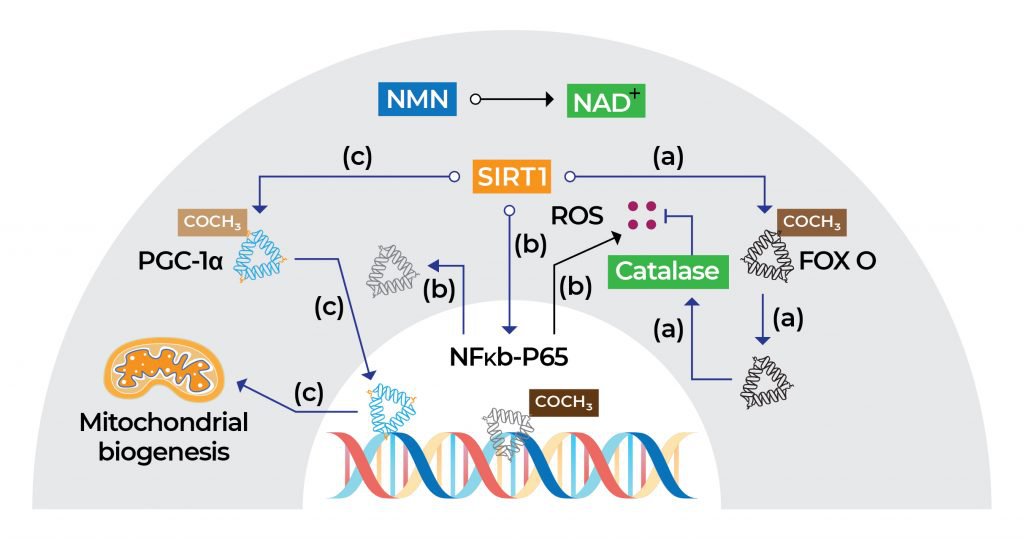 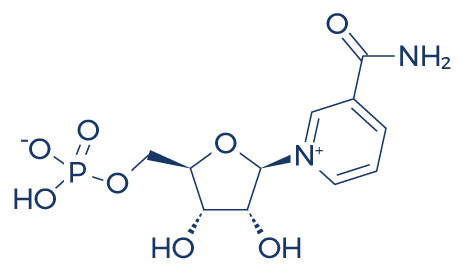 Within the cells, NMN is converted into NAD+ which plays an integral role in energy production and regulation of vital cellular processes. By boosting NAD+ levels, NMN can contribute to a longer lifespan. Studies show that people with higher NAD+ levels have a longer lifespan compared to those with lower NAD+ levels. [1-5]

Another mechanism that increases longevity is through increasing sirtuin (SIRT) activity which is associated with stable telomeres (located at chromosomes ends). This in turn helps attenuate the age-related telomere shortening which is linked to a shorter lifespan. [6] NMN boosts NAD+ levels which cause activation of SIRT, resulting in stable and longer telomeres. This process helps extends lifespan.

The longevity effects of NMN are backed by a number of studies:

A decline in NAD+ levels is associated with brain disorders such as Alzheimer’s disease, Parkinson’s disease, and other conditions that cause cognitive impairment. [26] By boosting NAD+ levels, NMN can lower the risk for these medical conditions. Another interesting mechanism is that the NMN-mediated increase in NAD+ levels can decrease the production of reactive oxygen species (ROS), which are linked to various brain disorders. Moreover, NMN can also help reverse the age-related cognitive decline by mitigating mitochondrial dysfunction.

A number of studies demonstrate the beneficial effects of NMN on cognitive function:

The NMN-mediated increase in NAD+ levels activates SIRT1, which in turn increases the production of cardioprotective molecules, such as MnSOD (antioxidants), Trx1 (antioxidants), and Bcl-xL (anti-apoptotic). [41] In addition, SIRT1 activation can also help protect the heart from inflammation and oxidative stress.

Mitochondrial respiration malfunction and increased glucose uptake are mechanisms observed in cancer cells. [56] The NMN-mediated increase in NAD+ levels has been shown to increase mitochondrial respiration and reduce glucose (blood sugar) uptake, indicating that NMN may help combat cancer. Another important mechanism is that NMN increases NAD+ levels which in turn activates SIRT1 and SIRT6, both of which inhibit the growth and spread of tumors.

A number of studies support the anti-cancer properties of NMN:

The blood sugar-lowering effects of NMN and its benefits on diabetes symptoms are backed by a number of studies:

NMN has the potential to suppress inflammaging, which is the age-related increase in inflammation. Specifically, NMN has been found to suppress cyclooxygenase-2 (COX-2), an enzyme that synthesizes the proinflammatory mediators known as prostaglandins. With this effect, NMN can help treat and ward off a wide array of inflammatory conditions.

A convincing number of studies support the anti-inflammatory effects of NMN:

NMN has the capacity to improve male and female fertility. It does this by improving the quality of both the egg cell and sperm cell. This in turn ensures successful fertilization and pregnancy. In addition, NMN can also help reverse some of the effects of aging on the reproductive system.

The beneficial effects of NMN on male and female reproductive health are backed by a number of studies:

Restoration of NAD+ through NMN supplementation can help protect photoreceptors (special cells in the retina that converts light into signals that are sent to the brain) against light-induced retinal damage. [86-87] The exact mechanism of NMN-induced eye protection can be attributed to SIRT1 activation since it is essential in the development and survival of the retina. Alterations in SIRT1 activity have been linked to various eye conditions such as aged retina, diabetic retinopathy, light-induced retinal degeneration, and oxygen-induced retinal damage. [88-93]

Studies show that NMN supplementation is essential for eye health:

The age-related shortening of telomeres adversely affects immune function, thus, increasing the risk of severe infection, inflammatory conditions, and chronic diseases. [101-103] Interestingly, NMN boosts NAD+ levels which in turn activates SIRT1. As a result, the telomeres lengthen and become more stable. Moreover, NMN has anti-inflammatory effects and the ability to regulate the activity of certain cells of the immune system.

A good deal of evidence supports the immune-boosting effects of NMN:

Sirtuins play a critical role in regulating various cellular functions including energy metabolism, stress resistance, and circadian rhythm neuronal function – all of which are essential for increasing energy levels. [111-112] Since NMN activates SIRT1 by increasing NAD+ levels, it may help boost energy levels and reduce fatigue. Moreover, NAD+ is essential for the production of adenosine triphosphate (ATP), which is needed by the cells to perform various biological functions.

An increasing number of studies support the beneficial effects of NMN on energy levels and medical conditions that cause fatigue:

Evidence suggests that NMN is beneficial for achieving a healthier weight because of its fat-burning properties:

A stroke occurs when the blood supply to the brain is cut off. NMN has the ability to widen the blood vessels which can help restore blood flow to the brain. In addition, the anti-inflammatory effects of NMN can help relieve brain swelling associated with stroke.

A number of studies suggest that NMN treatment is beneficial in treating the symptoms of stroke and improving recovery outcomes:

NMN boosts NAD+ levels resulting in SIRT1 activation. This process is essential in liver health as SIRT1 activation improves cholesterol, fat, and lipid transport as well as fatty acid homeostasis in the liver. [125-127]

Studies show that NMN can improve liver function and protect against liver disease:

The anti-aging effects of NMN can also help address the age-related decline in kidney function. Reduced levels of NAD+ are associated with reduced sirtuin activity which in turn causes deterioration in the overall function of the kidneys. The ability of NMN to boost NAD+ levels activates SIRT1 which can possibly mitigate the negative effects of aging on the kidneys.

Associated Side Effects of NMN

Side effects associated with NMN may include the following: