Tetrahydrocannabinol, also known as THC, is the compound in cannabis that gives users the feeling of being high (psychoactive effect). This cannabinoid has the same structure and molecular mass as cannabidiol (CBD), which inhibits the effect of THC. The FDA has approved a synthetic form of THC known as dronabinol as an appetite stimulant for patients with significant weight loss due to AIDS and as an anti-vomiting agent for those undergoing chemotherapy. Aside from these indications, THC also boasts a wide array of health benefits that are essential for almost every system in the body.

The body has cannabinoid receptors located in the brain and central nervous system. By binding to these receptors, THC exerts its effect. Depending on the method of consumption (vaping, syrups, edibles, oils, or lotions), the psychoactive effect of THC may vary from person to person. 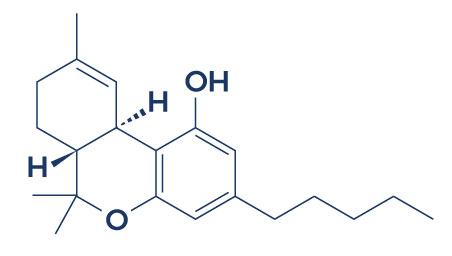 An overwhelming body of evidence shows that THC has natural antineoplastic properties making it beneficial for patients afflicted with various types of cancer:

Evidence suggests that THC has an antispasmodic effect, which means that it can suppress muscle spasms:

For people with decreased appetite, THC can help improve overall health and prevent problems associated with nutrient deficiency. A growing body of evidence suggests that THC is an appetite stimulant:

Administration of THC in people with sleeping difficulties can also lead to improved sleep quality. This beneficial effect of THC is backed by numerous high-quality studies:

According to studies, THC has an anti-seizure effect that can help improve the quality of life of people with seizure disorders:

The anti-inflammatory effects of THC are backed by a number of high-quality studies:

Studies also suggest that the pain-relieving properties of THC can provide long-term relief in people suffering from migraine attacks and those with chronic headaches:

The anti-depressant effects of THC can help improve overall mood in depressed patients, according to studies:

Evidence also suggests that THC has the capacity to protect the heart against injury and improve certain parameters necessary for cardiovascular function:

Emerging evidence suggests that THC can treat various neurodegenerative diseases because of its ability to protect neurons (nerve cells) against injury and stimulate nerve regeneration:

Associated Side Effects of Tetrahydrocannabinol

Side effects associated with tetrahydrocannabinol may include the following: