The human copper-binding peptide GHK-Cu (glycyl-l-histidyl-l-lysine) is a natural peptide that is currently used as a protective a regenerative ingredient in skin and hair products because of its numerous benefits on the skin and hair. For instance, GHK-Cu improves wound healing, stimulates collagen and glycosaminoglycan synthesis in the skin, boosts the immune system, and promotes growth of blood vessels. GHK-Cu also has significant anti-aging effects as it has antioxidant and anti-inflammatory properties.

GHK-Cu works by boosting collagen and elastin production in the skin. Collagen makes the skin strong and resilient while elastin makes the skin flexible enough to regain its shape when stretched. It also has the ability to regulate both metalloproteinases (a group of enzymes that can break down proteins such as collagen) and their inhibitors, which in turn improves skin regeneration and appearance. In addition, GHK-Cu also promotes hair growth by blocking the hormone dihydrotestosterone (DHT). Finally, it promotes nerve regeneration by increasing the production of nerve growth factors.

GHK-Cu works by boostingcollagen and elastin production in the skin. Collagen makes the skin strong and resilient while elastinmakes the skin flexible enough to regain its shape when stretched.It also has the ability to regulateboth metalloproteinases (a group of enzymes that can break down proteins such as collagen) and their inhibitors, which in turn improves skin regeneration and appearance.In addition, GHK-Cu also promotes hair growth by blocking the hormone dihydrotestosterone (DHT).Finally, it promotes nerve regeneration byincreasing the production of nerve growth factors. 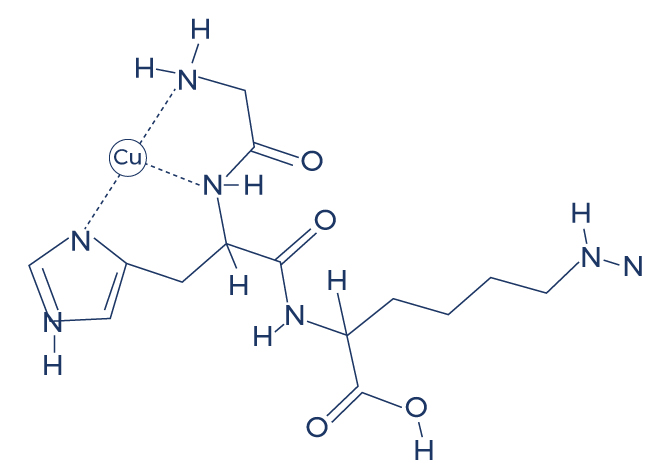 Research studies have shown that GHK-Cu has significant regenerative and antioxidant properties that improve skin health and prevent skin aging. For instance, animal studies and clinical trials have demonstrated that GHK-Cu tightens loose skin, which is one of the most apparent sign of skin aging:

Thinning of the skin with age is the result of the loss of keratinocytes in the skin and the reduced volume of the dermis, which is due to the loss of collagen and elastin in this skin layer. Thinning makes the skin appear translucent, causing veins and tendons to become apparent. Research studies and controlled trials provide scientific evidence that GHK-Cu effectively reverses thinning of aged skin:

Research studies have shown that GHK-Cu also smoothens and evens out skin texture:

Prevents aging through its antioxidant effects

GHK-Cu plays an integral role in tissue remodeling and other phases of the wound healing process. An overwhelming body of scientific evidence supports the regenerative properties of this tripeptide:

Because of its regenerative properties, GHK-Cu has also been used for the treatment of several lung conditions, as evidenced by the following studies:

There is also strong scientific evidence that supports the effects of GHK-Cu in stimulating hair growth and preventing age-related hair loss:

Evidence suggests that GHK-Cu also has potent anti-cancer properties that can help suppress the growth and reproduction of aggressive cancer cells:

Studies show that GHK-Cu has the capacity to heal the most debilitating nerve injuries:

A number of studies reported that GHK-Cu has the ability to protect liver cells against various types of injury:

The regenerative properties of GHK-Cu have also been shown to be beneficial in bone disorders:

GHK-Cu has also been shown to exert anti-inflammatory properties:

Associated Side Effects of GHK-Cu

Side effects associated with GHK-Cu may include the following: