Honokiol is one of the chemicals found in Magnolia bark that is believed to be up to 1000 times more potent than vitamin E with regard to its antioxidant properties. Since 100 A.D., Magnolia bark is used by ancient Chinese in the treatment of a plethora of medical conditions including gastrointestinal disorders, respiratory infections, and body pains. Recent research found that honokiol is mainly responsible for the diverse health benefits of Magnolia bark.

Honokiol exerts its antioxidant properties by blocking reactive oxygen species (ROS), which are unstable molecules that can cause cellular damage and cell death. This effect can help protect against various types of diseases related to free radicals. 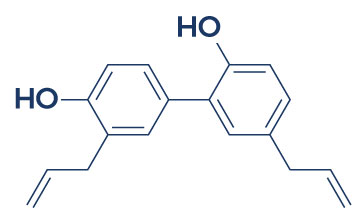 A. Wards Off Depression

Honokiol can stimulate the production of brain chemicals called neurotransmitters, which has an effect on mood stabilization. This produces a relaxing and calming effect that can help fight symptoms of depression. Numerous studies support this potent antidepressant effect of honokiol:

Aside from its antidepressant effects, honokiol has also been shown to fight anxiety by affecting the levels of certain brain chemicals:

There’s also strong scientific evidence supporting the potential benefits of honokiol in diabetics and those with chronic blood sugar elevation:

When it comes to improving body composition, studies show that honokiol could help achieve a healthier weight by improving different health parameters:

Honokiol is a natural remedy for pain. Its pain-relieving properties are backed by high-quality studies:

As a potent antioxidant, honokiol may help fight various types of cancer and even lower one’s risk of getting this debilitating disease. There’s an overwhelming body of clinical evidence supporting the anti-cancer properties of honokiol:

Studies show that honokiol also has cognitive-boosting effects that may be beneficial in age-related cognitive dysfunction and medical conditions that cause cognitive impairments:

Researchers also suggest that honokiol may help fight insomnia and other sleeping problems by affecting the stages of sleep:

Associated Side Effects of Honokiol

Side effects associated with honokiol may include the following: